The limitations of batch distillations are naturally circumvented in continuous distillation as shown in fig.2 which is a typical fractionating unit comprising of ratification &stripping sections. Here feed is continuously fed to the column with withdrawal of top & bottom products. The process takes care on its own by simply maintaining the flow rates of feed & Utilities.

However when more than two products are desired as in case of multicomponent systems additional columns are required as each column is capable of giving two products only. That is to say, for multicomponent system only one product is obtain in relatively pure form from each column. The other product containing the remaining components is fed to a subsequent column where again one product is obtained in relatively pure form. The addition of columns continue till the system becomes binary & both components are separated in the final column.

An important principle to be emphasized is that a total n-1 fractionators are required for complete separation of system of n components. Which of the two products in a column is to be obtained in relatively pure form depends on relative volatility of each component in the feed stock. For example consider a ternary solution consisting of a components A, B & C whose relative volatilities are in that order (A most volatile). In order to obtain three substances in substantially pure form either of the schemes shown in fig-3 may be used. Which of the two schemes would be used depends on the relative difficulties of separation in each method and the choice calls for finer considerations of principles of distillation. However scheme (b) is usually preferred since it requires one vaporization of substance A. 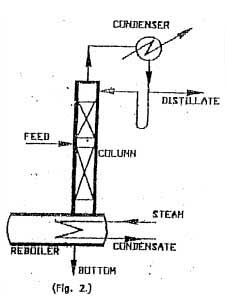 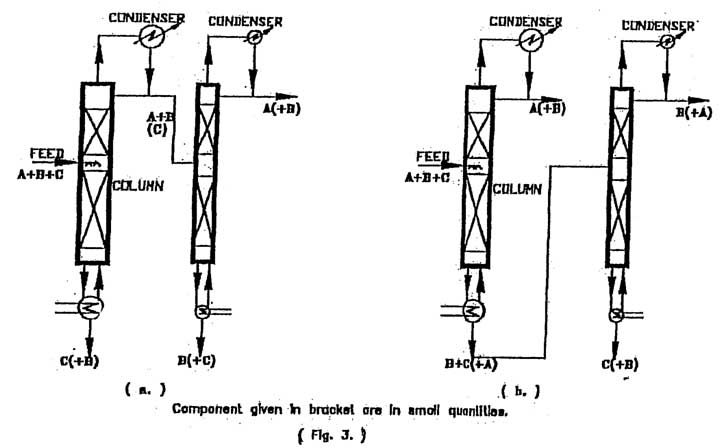 Goel Scientific Glass Works Ltd. is one of the leading Scientific glass fabricator in the world, who has provided the Glass Industry of India a big leap in the Global Market.

Note :Your details are kept strictly confidential as per our company policy.